Val d’Orcia is not a place to be crossed in a hurry: 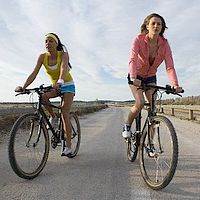 lanes, cart-tracks and pathways invite the visitor to move slowly, to savour what he sees, to stop and enjoy views and monuments but also details of the landscape: hamlets, isolated cypresses, erosion furrows.

Whether you are travelling on foot, on horseback or by bike, with a group of friends or a specialised agency, the ancient roads of Val d’Orcia offer a great variety of itineraries. You needn’t be a great rambler or tour cyclist. And those visiting Sienese territory by car can park for a few hours and go walking along one of the many routes indicated: all you need is a knapsack, a stout pair of shoes, a waterproof jacket in case it rains and a sunhat.

Wine lovers can go up to Montalcino through the Brunello vineyards. Those who prefer panoramic views can follow the ridge between Radicofani and Contignano, opposite Amiata. The pathway of the Orcia gorges offers Mediterranean atmospheres and flora. The one that passes through the Orcia gorges from Bagno Vignoni leads to Ripa d’Orcia, a 20th century reconstruction of a fort that belonged to the Salimbeni and Piccolomini families. Ripa and its view of Amiata can also be reached from San Quirico by a dirt road that passes by the village and the tower of Vignoni.

Going up from Castiglione d’Orcia to the Vivo you are immersed in the volcano forests. Between Monticchiello and Pienza, or around Sant’Anna in Camprena, you can enjoy the undulating outlines of hills that seem to pile up into infinity..

In order to give an idea you of which wonderfulness can be crossed around the Poggio Cantarello Hill we suggest you four simple routes:

Leaving from Bagno Vignoni (Vignoni Bath) through the Carriageway that covers the typical senese campaign, forests to Mediterranean spot and the Orcia river, it is reached Castelnuovo dell’Abbate , from where you can admire from above the Starcia walleye where it dominates the Abbey of S. Antimo. Possibility of tastings the Brunello and from Tuscany typical plates encircles to you from the wine cask of Brunello, in one authentic wine cellar of the famous wine.

Route that connects two “pearls” of our Rinascimento in a territory that encloses in full load the essence of the “toscanità”. History, atmosphere, taste catch up the maximum expression… Without forget the traditions, made to live again in the small village of Montichiello. Box Lunch or in a typical premises along the way. To the end of the day “Noble” wine tasting in the splendid wine cellars of Montepulciano.

To the slopes of the Monte Cetona you will find the naturalistic archaeological Park of Belverde – Biancheto, one of the more important complex than pre-protostoriche stations of the central part of Italy (period comprised between the Paleolitico and the Age of the Bronze), with its coves, the lecceta spontaneous, plants of cliffs and the Eremo di S. Maria of Belverde. After a visit of the place it is come down, with one walk of 4 km between the olive trees, towards Cetona. Cetona is an idyllic country grouped round to a hill of the Valdichaina, situated to Levant of the long montuosa ridge that separates lands of the Chiana and the Orcia, that it culminates in the unmistakable summit of the Mount. All round the wonderful rural landscape is stretched with the succession of the cultivates fields, alternated to the weft of the olivete and the vineyards. From many years Cetona and its lands have already become preferred goal for the vacations of artists, directors, writers, scientists, politicians.

Departure from S. Quirico, old village, of a probable Etruscan origin, situated in a hill that divides the Asso walley from the Orcia one, after the visit of the Horti Leonini, arrogant garden estern, realized around to the 1580 from Diomede Lions, takes the path, “via of the grain” name gived to this road in the ‘600 and which it take, still today in the zone of the flour mills, d excavated in the cliff and feeds you from thermal waters, used in order to mill the grain until years fifty (1950), today this zone Park of the Flour mills is called. Coming down along a carrareccia between olive trees it is arrived to ancient terme the roman one of Vignoni Bath, famous thermal center since the antiquity; the Loggiato was cured in its waters Saint Caterina from Siena (door the name of the Saint that shows oneself on the bathtub), Lorenzo the Magnificent one. Who wants can make a dive in swimming pool, in order then to replace to us in way in order to return to S. Quirico.